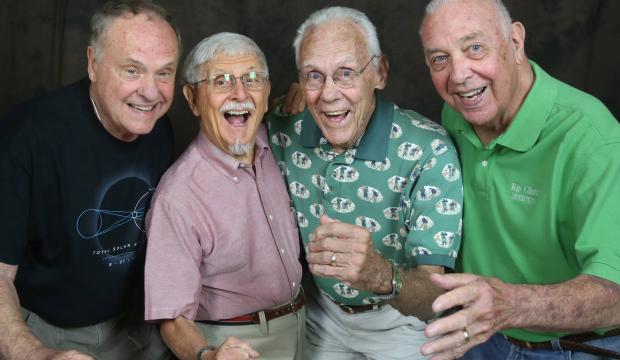 A success story that exemplifies the theme of this guidebook is that of the Rip-Chords quartet of the Central States District. They were the oldest registered, functioning performing quartet in the entire Society when they hung up their pitch pipe in 2016. After 54 years of chartered airplane rides, rehearsals, two recorded albums and many, many performances they decided that they just couldn’t continue entertaining any longer.

“There’s a certain amount of emptiness in our lives because of seeing each other at least once a week and performing for both young and old and in between. There is sorrow and grief, and also joy and pleasure. What wonderful friends we’ve become over the years.”

The quartet entertained thousands at clubs, businesses, churches, and other engagements in Kansas, Colorado, Missouri, Oklahoma, Arkansas, Nebraska, Iowa, and Chicago. The Rip-Chords would play the Knife and Fork Club circuit, a dinner/lecture series held in different towns in the area. The quartet was also featured at the Branson Music Festival in Missouri, and appeared on ABC Television’s Good Morning America. The Rip-Chords performed at many nursing homes and serenaded many 100-year-olds at their birthday parties. Individuals would call-in on KTWU (PBS) Television and bid on the Rip-Chords to perform at social gatherings, weddings, or anniversaries.

Basically any time someone needed entertainment, they would perform a 20-30 minute show. They kept busy, performing 30-40 shows per year. Their repertoire included Broadway, pop, patriotic, and religious songs. The quartet’s last performance was at a fundraiser to help citizens of Topeka Kansas.

The quartet’s four members when they disbanded were Tom Knoebber, bass; Herschel Stroud, lead; Doug Exline, tenor; and Bill Hamm, baritone. During its lifetime the quartet had different members coming and going, but always survived because of the core belief in entertaining audiences. The first members were Greg Lyne (who later became Director of Music Education for the Barbershop Harmony Society), Jerry Goacher, Knoebber, and Stroud. During their 54 years of singing, other members have included Bob Fox and Don Newman.