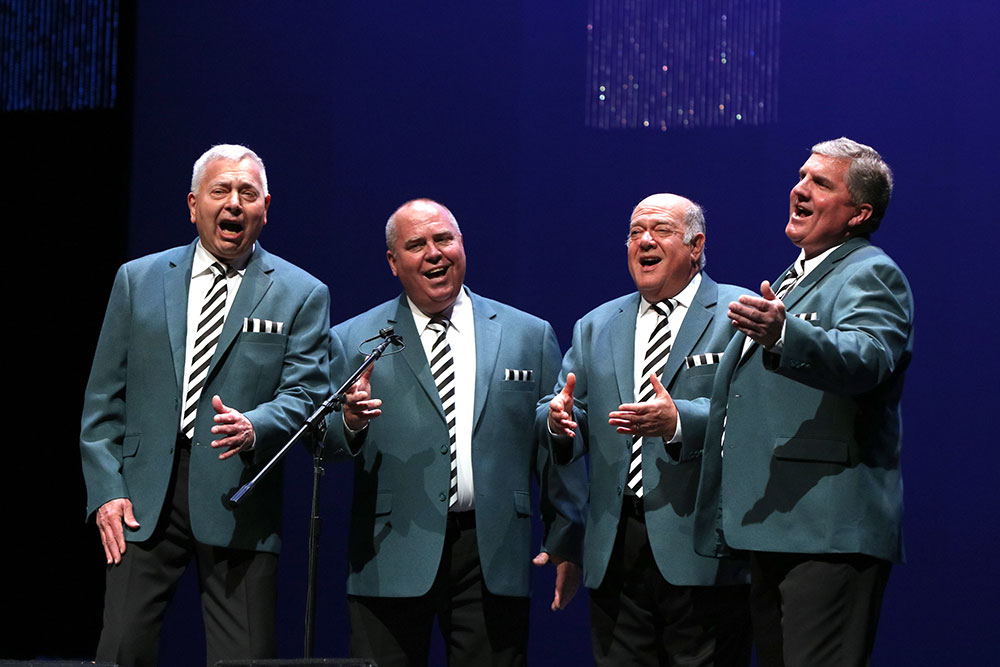 Party of Five is an a cappella barbershop quartet committed to sharing the joy in their journey of friendship and ringing chords with people of all ages, and believes that supporting youth in harmony is the key to future generations of happy, healthy singers. There is always room at the Party for one more, for a song, a tag, or a good story.

Party of Five was formed in October 2015 and proudly represents the Mid-Atlantic District of the Barbershop Harmony Society. Their smooth warm sound and heartfelt delivery come across the footlights to invite you on their journey. You’ll be glad you joined the Party! 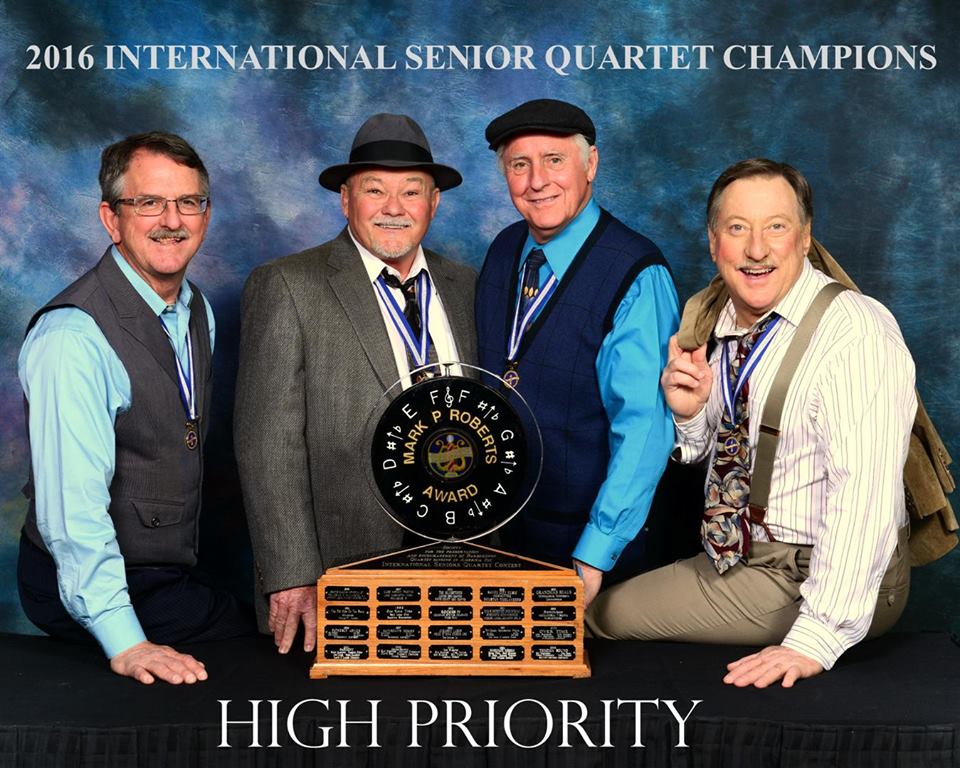 High Priority formed in April, 2014 and fairly quickly won the 2014 AZ & Far Western District SENIORS Championships that fall, then went on the win the silver medal in 2015 in New Orleans at the International Seniors Quartet Contest. 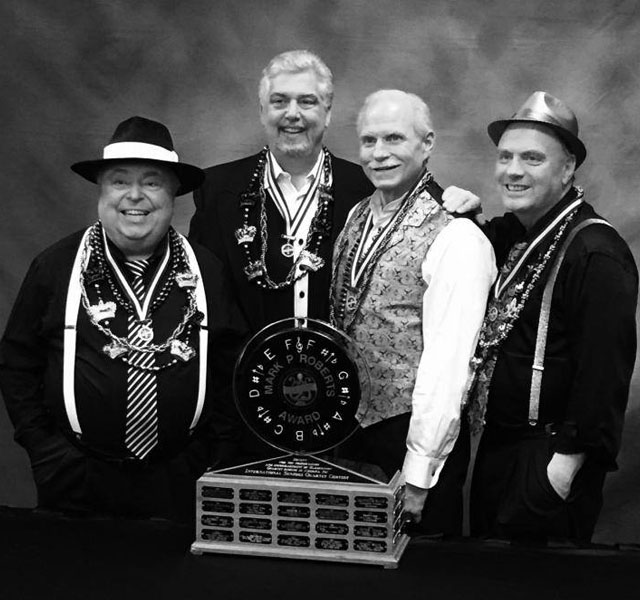 Hailing from the Rocky Mountain District, Saturday Evening Post (otherwise known as SEP) has a long and rich history of performing all over the world entertaining audiences far and wide with their unique brand of barbershop harmony. SEP has also enjoyed a very successful career in the Society’s International Quartet Contest, having won a bronze medal in the 2004 contest in Louisville. Singers Brian Beck and Bobby Gray also have won gold medals with their past quartets, Bobby with The New Tradition (’85), and Brian with Dealer’s Choice (’73) and Side Street Ramblers (’83).

Under various combinations of singers (and a few monikers), SEP competed for many years before focusing primarily on generously giving their talents back to their communities through fantastically entertaining shows and appearances at educational events and festivals.

Saturday Evening Post came out of “contest retirement” one more time to compete and win the 2015 Seniors Quartet Championship, and we’re glad they did! 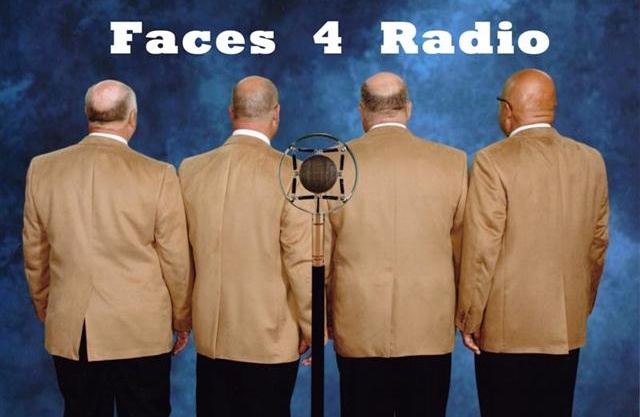 We have experienced two incredible and very busy years together on both competition and show stages, as well as numerous private performances including: Baseballtown at First Energy Stadium with the Reading Fightin Phillies, the Philadelphia International Festival of the Arts 2013, and a very moving volunteer performance at the University of Pennsylvania Hospital as representatives of the Musicians On Call program.

This past January in Long Beach, CA., we were humbled and very proud to be named the Barbershop Harmony Society 2014 International Senior Quartet champions. We look forward to representing our chapters,the Mid-Atlantic District, and the entire BHS during this upcoming year, and hope to see many of you at a future convention or performing at your chapter show. 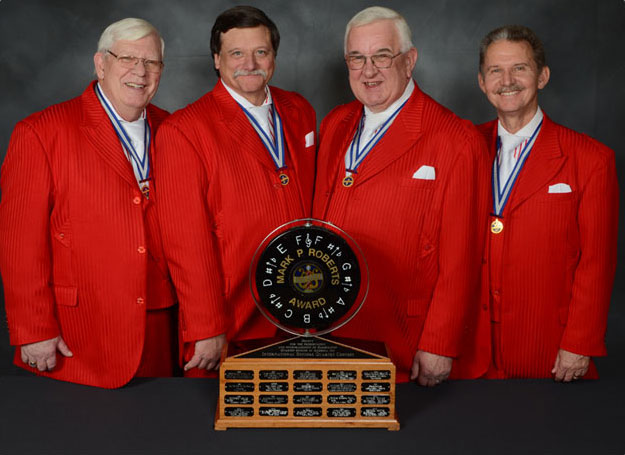 Consisting of Ron Mason from Irving, NY, Bob Fuest from Warsaw, NY, Al Baker from Mt. Hope, Ontario and Bobby Gibson of Toronto, the quartet triumphed over twenty-seven other quartets from all over the world. Their set included “Stars Fell on Alabama” and “Each Time I Fall in Love”. Speaking for the group, Baker commented, “This year, instead of going out there to ‘win’, our goal was just to provide the audience with an emotional experience. We felt that if we did that, the contest would take care of itself.” They definitely achieved both goals with a score of 73.1%, while the other medalists topped out at 71.7%. 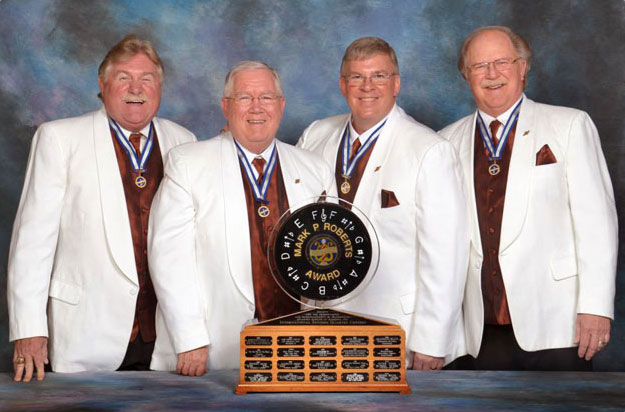 Rusty Pipes (JAD) clearly proved that they’re only kidding about the name when they won the Seniors Quartet Gold Medal at Midwinter Convention in Tucson on Friday, January 20, 2012. These guys were definitely in fine voice, with great showmanship to boot.

Rusty Pipes only just formed in August 2011, but some of the members are no strangers to gold. Jay Hawkins and Dale Fetick together won a Quartet Gold Medal with Marquis in 1995, and Carl Taylor won a previous Seniors Gold with The Barons in 2003. 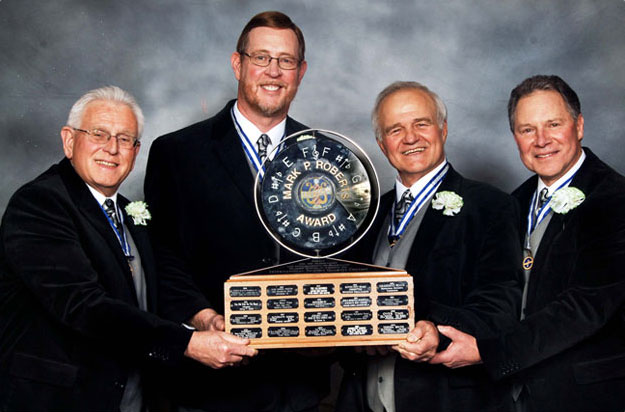 Over Easy took the gold in the exciting International Seniors Quartet Competition at the Barbershop Harmony Society’s Midwinter Convention in Las Vegas. A total of 27 seniors quartets from all over the world squared off in the annual contest to become the 2011 Seniors Quartet Champion. The top five quartets each received a medal. Members of the gold medalist quartet Over Easy are tenor Alan Reese, lead Carl Ondrus, baritone Glenn Siebert, and bass Mark Hannum. 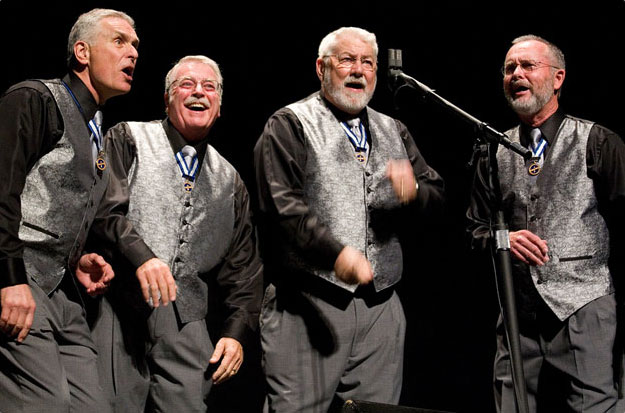 Resisting-A-Rest took the gold in the exciting International Seniors Quartet Competition at the Barbershop Harmony Society’s Midwinter Convention. A total of 27 seniors quartets from all over the world squared off in the annual contest to become the 2010 Seniors Quartet Champion. The top five quartets each received a medal. Members of the gold medalist quartet Resisting-A-Rest are tenor Bruce LaMarte, lead Thomas Conner, baritone Steven Warnaar, and bass Phil Haines.

Resisting-A-Rest began singing together the summer of 2007 and competed together for the first time in October, 2007 to win the right to represent the Pioneer District, (Michigan and western Ontario, Canada), in the senior quartet contest. After several medalist finishes, Resisting-A-Rest finally brought home the grand prize in Tampa. 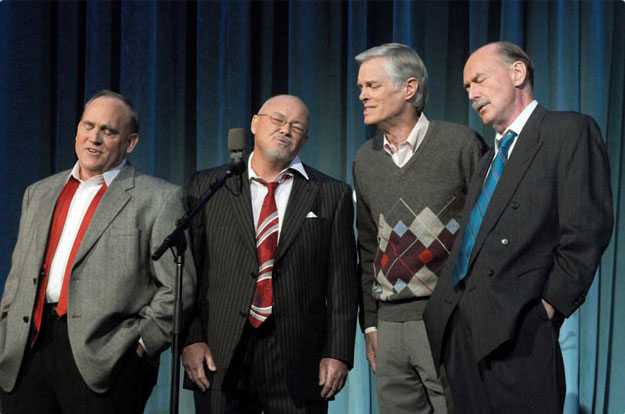 Audacity, formed in early 2007, has traveled to Illinois, Colorado, California and Tennessee to compete in various competitions. In Nashville they participated in the 2008 International Quartet Competition. All four men are members of the Greater Phoenix Chapter.