Flawless harmonies and jazzy  interpretation propelled After Hours  to the pinnacle of a cappella singing, as it captured the 2018 international quartet championship of the Barbershop Harmony Society on Saturday, July 7 in Orlando.

Singing a range of songs from Broadway including “Butter Outta Cream” from Catch Me If You  Can, “The Next Ten Minutes” from The Last Five Years, and classics like “Honeysuckle Rose,” the quartet  posted the highest winning score in the history of the annual competition, now in its 80th year.

The quartet edged out strong challenges from the silver medalist Signature, who brought smoky intensity to blues-tinged numbers like Ray Charles’ “Hard Times (No One Knows Better than I)” and the pop/country stylings of Throwback.

The top five finishers were:

The members of After Hours  are: In 2011 at the International Convention in Kansas City, a quartet based out of Florida named Main Street took the stage and immediately set themselves apart from the crowd. They took many combined years of experience singing together at Disney World, combined it with Vaudeville-style eyeroll-worthy joke-infused hilarity, threw in some smooth choreographed toe-tapping dance moves, and topped it off with a beautiful, rich, warm sound that wowed the audience and brought home a bronze medal in only their first contest.

The dapper gentlemen of Main Street certainly did paid their dues on the contest stage, however. They finished 5th in 2011, then 5th in 2012, then 4th in 2013, then 3rd in 2014, then 3rd in 2015. Then 3rd… AGAIN… in 2016, and finally gold in Vegas in 2017. While their winning contest sets in Vegas were magical for them and the audience, all their work on the contest stage in past years hasn’t gone unnoticed. Their “Pop Songs Medley” in 2015 in Pittsburgh, for example, struck a chord with the audience as well as the internet with their YouTube video going viral, quickly becoming one of the most popular barbershop videos of all time.

Congratulations to Main Street, a quartet with grace, charm, style, and a sound that will no doubt set them apart for years to come. 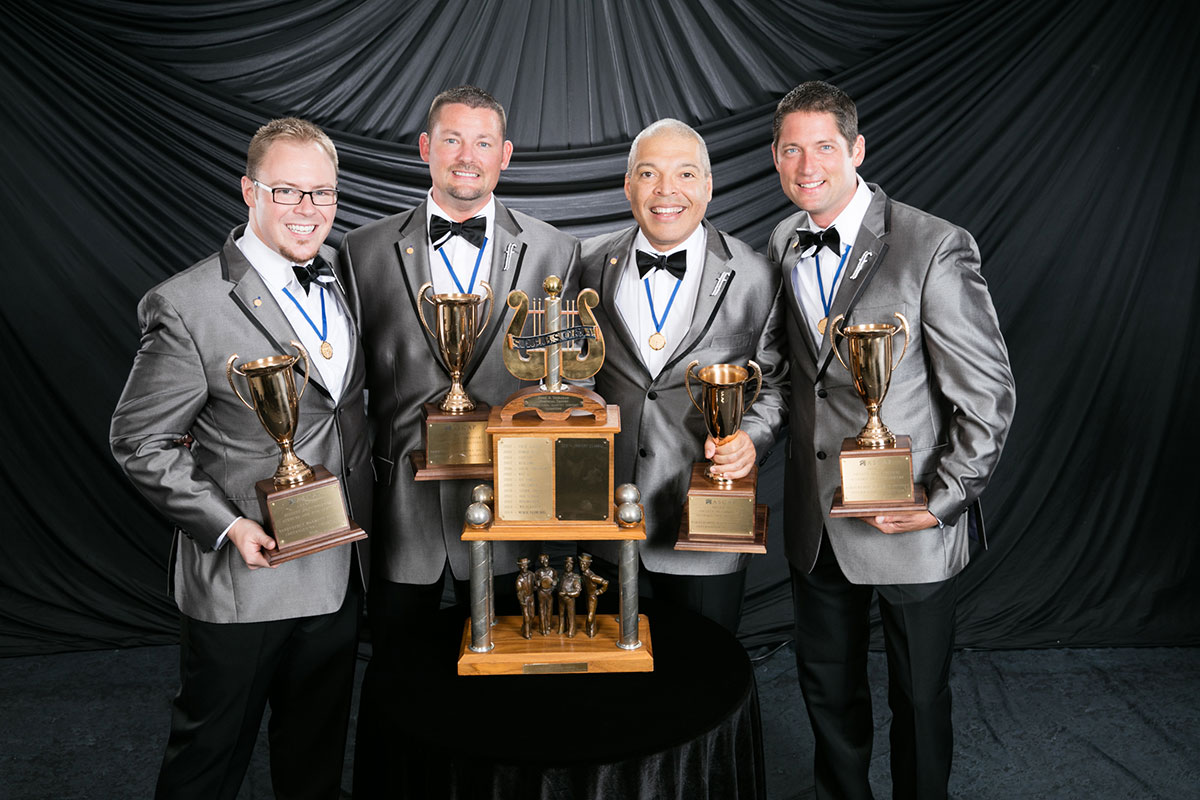 For the third year in a row, the newly crowned Barbershop Harmony Society International Quartet Champion contains a set of brothers, proving yet one more time that when it comes to lock and ring, family does indeed matter. These gentlemen finally took home the coveted prize after finishing 5th in 2013, 2nd in 2014, then 2nd again in 2015.

It was a championship forged in the fires of persistence and determination, showing that dedication to the craft truly pays off. In the past year particularly, their friendship with 2015 champ quartet Instant Classic had strengthened which lead to many artistic collaborations on concert stages and in the recording studio. Also critical to their success were the relationships they had formed with several coaches and mentors that helped an already magnificently fine-tuned quartet make even further strides in their singing technique and emotional vulnerability that brought more genuine emotion to the International stage for them than ever before.

It was a thrilling victory for Forefront after several years of coming in an extremely close second, and finally in Nashville at the Bridgestone Arena they hoisted the championship trophy as gold medalists. 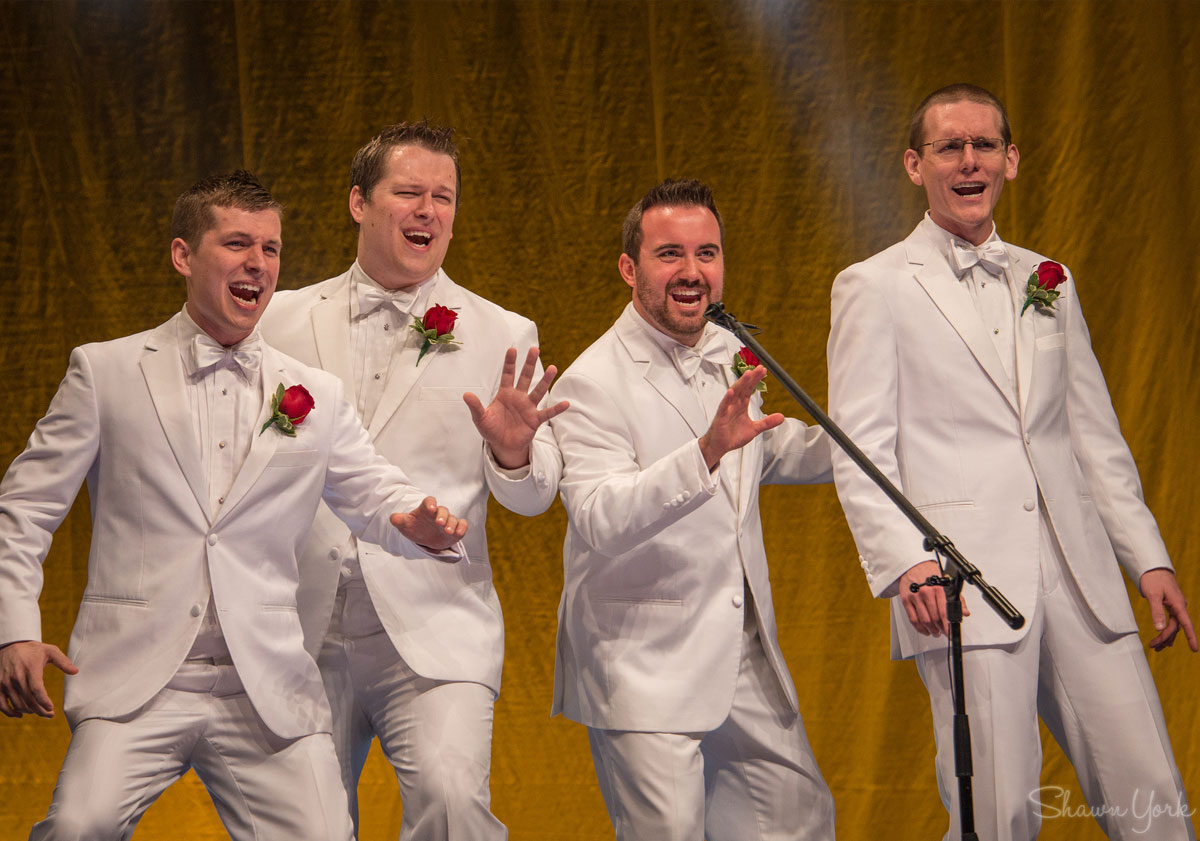 In one of the biggest leaps in ranking in recent memory, Instant Classic jumped from an 8th place finish in 2014 to winning it all in 2015. With a smooth, vibrant, and youthful sound, Instant Classic delivered consistently thrilling and heartfelt performances, winning the hearts and minds of the audience as well as earning the highest overall score by an esteemed panel of judges over three rounds during one of the most intense and closest quartet competitions seen in many years at International.

Bass clef brothers Kyle and Kohl Kitzmiller proved once again that family does matter when it comes to achieving world-class lock and ring, and David Zimmerman put a virtuosic tenor flare on top of it all while the incomparable lead Theo Hicks executed powerfully emotional and electric performances that moved every member of the audience in attendance. 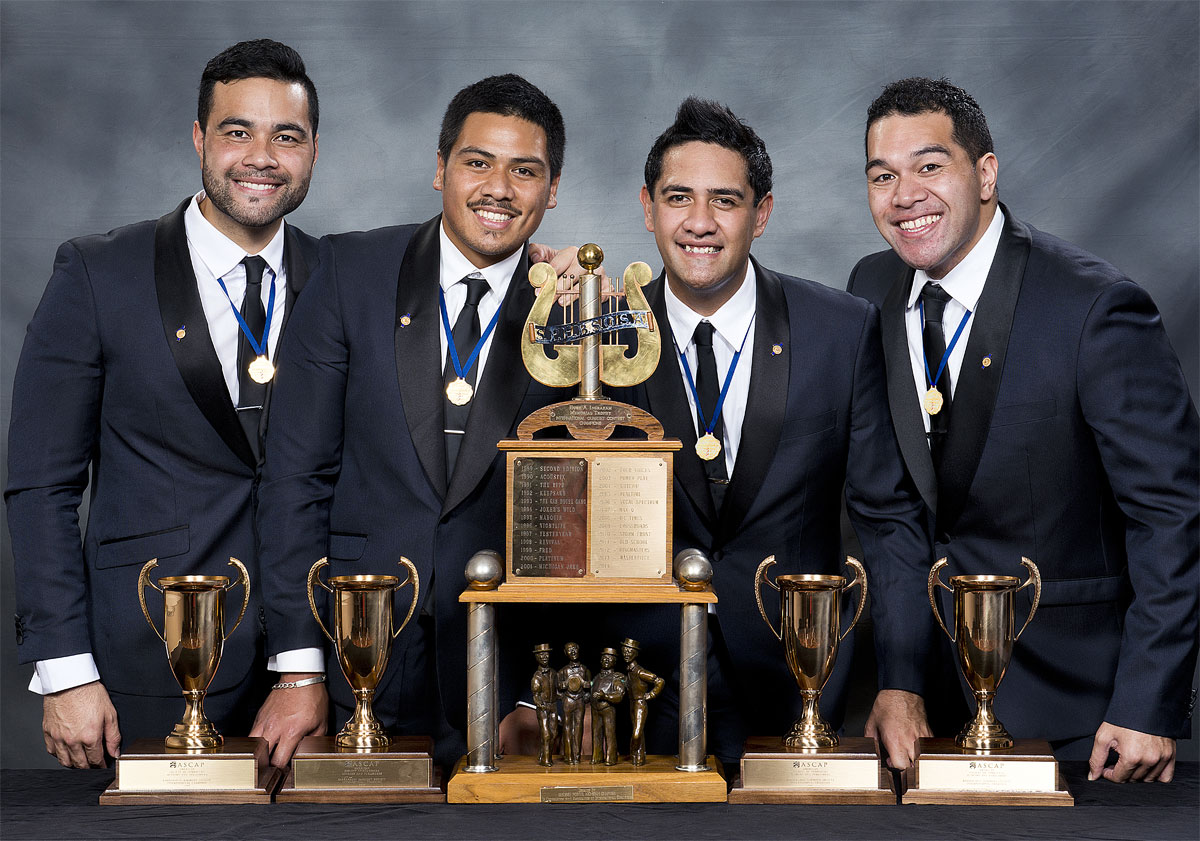 The North American tradition of barbershop harmony became more global in Las Vegas, as the pride of New Zealand, The Musical Island Boys finally win gold after twelve years together as a foursome. 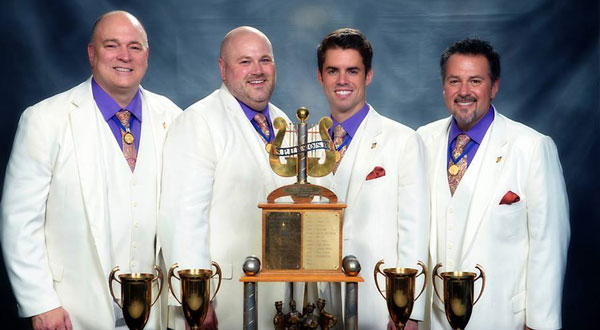 Singing music ranging from Kathy Mattea’s “Where’ve You Been” to American classics “Tennessee Waltz” and “Sweet Lucy Brown,” the quartet emerged from a pack of fifty quartets at the contest, held at the 75th Anniversary Convention of the Barbershop Harmony Society. 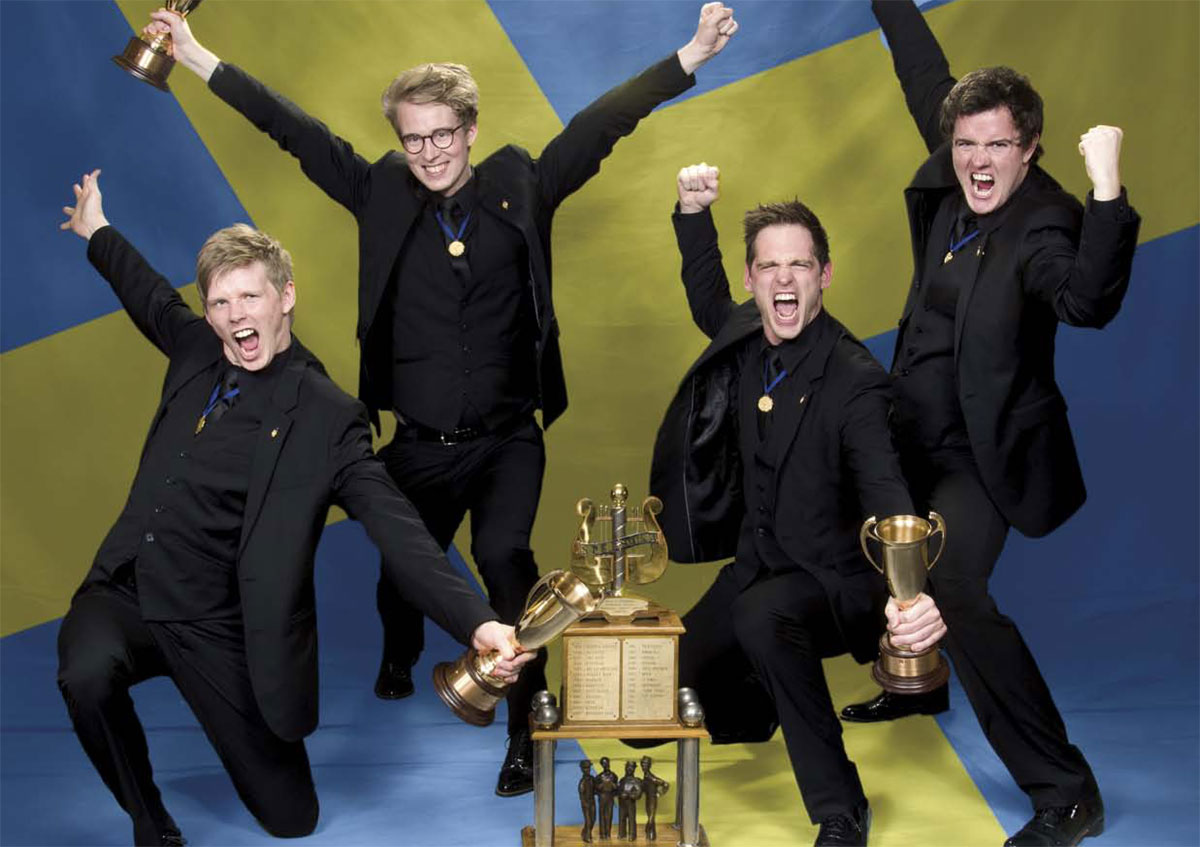 Ringmasters made history in Portland by becoming the very first quartet from a Society affiliate to win the coveted quartet gold medal. Travelling all the way from Stockholm, Sweden, Ringmasters combined virtuosic singing with championship-level entertainment and youthful energy to bring back a Gold medal for the Society of Nordic Barbershop Singers (SNOBS) Affiliate.

Ringmasters made their Society contest debut competing in the International Collegiate Quartet Contest first at the 2007 Denver International Convention, and then returning in 2008 to win the Collegiate gold medal in Nashville. They also competed in the International Quartet Contest that same year, finishing an impressive 17th place. In 2009 in Anaheim, they won a 4th place Bronze medal, and in 2010 in Philadelphia they won a 3rd place Bronze medal. After taking a year off in 2011, they returned triumphantly in 2012 to win the Gold medal in Portland.

The mighty awesome and talented Old School won the coveted Gold Medal at the Barbershop Harmony Society’s 2011 International quartet contest Saturday evening at the Sprint Center in downtown Kansas City. The competition was fierce and the energy high among the 50 quartets participating in the Society’s 73rd Annual International Convention.

Old School’s members are tenor Kipp Buckner from Sellersburg IN, bass Joe “Beast” Krones of Hurst TX, lead Joe Connelly of Falls Church VA, and baritone Jack Pinto of Hamilton NJ. The group placed fifth in international barbershop competition in 2008, second in 2009, and second again in 2010. Old School stood out in the contest with their special attention to “old school” song choices and a huge energetic sound to go along with it. 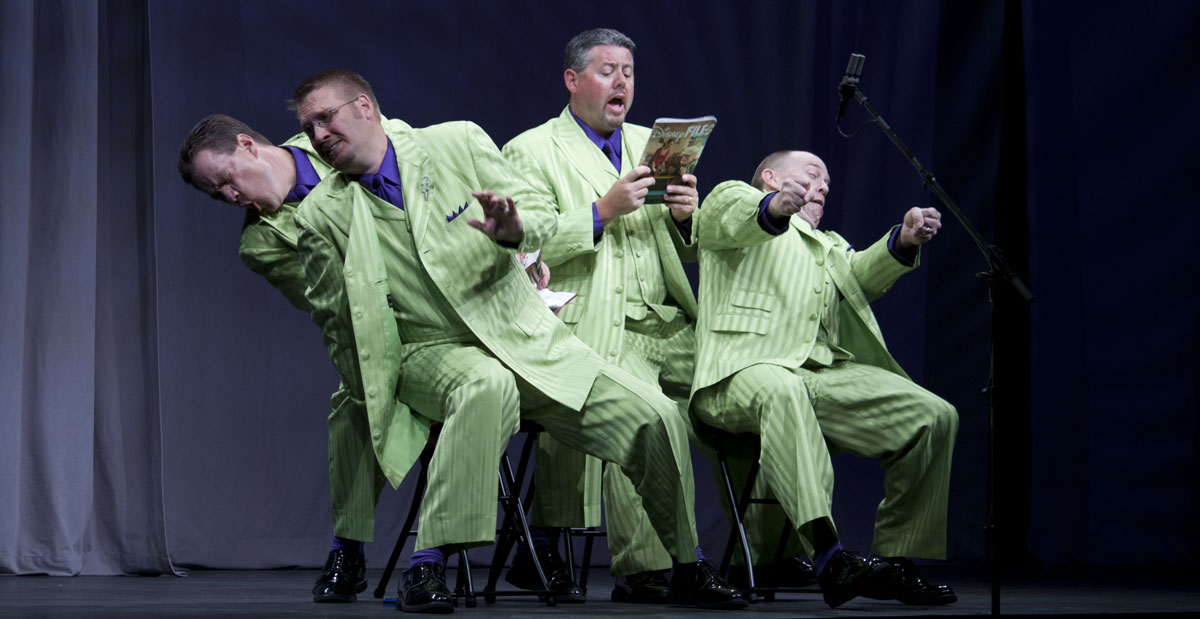 The comedic quartet Storm Front created plenty of thunderous applause and light-hearted laughter as they won the coveted Gold Medal at the Barbershop Harmony Society’s 2010 International quartet contest Saturday evening at the Pennsylvania Convention Center. The competition was fierce and the energy high among the 51 quartets participating in the Society’s 72nd Annual International Convention.

Storm Front’s members are tenor Jeff Selano and bass Syd Libsack of Atlanta, GA and lead Jim Clark and baritone Darin Drown of Denver, CO. The group placed third in international barbershop competition in 2007, sixth in 2008, and third again in 2009, which prompted them to write and perform the parody “We’ve Grown Accustomed to 3rd Place”. They also performed a medley entitled “Car Song”. Storm Front stood out in the humor category amidst mostly traditional and several contemporary barbershop quartets. 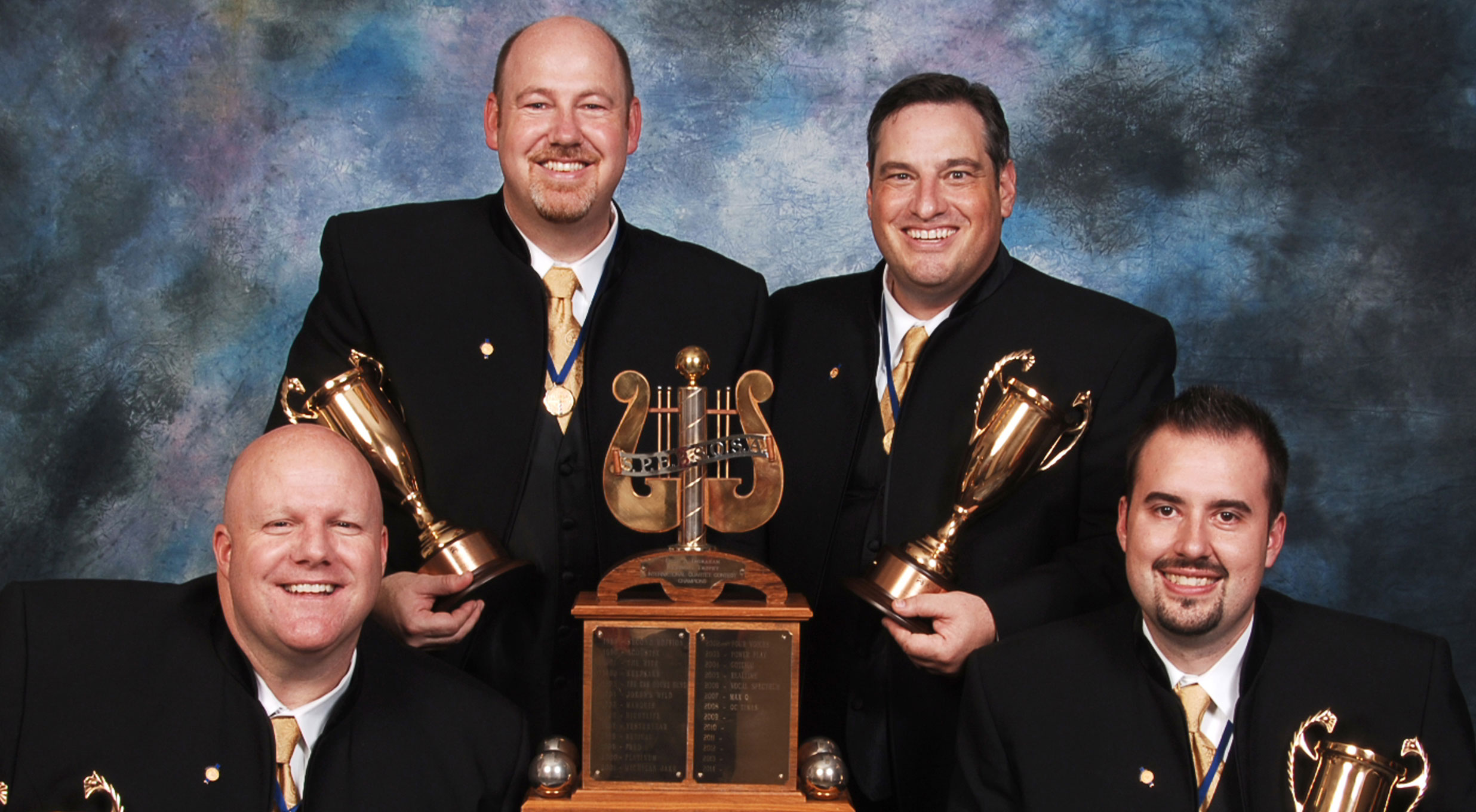 Crossroads’ members hail from all over the United States – Missouri, Florida, Tennessee, and Michigan. Together, Fred Farrell (tenor), Mike Slamka (lead), Brandon Guyton (baritone), and Jim Henry (bass) not only beautifully master the barbershop style, but they also entertain audiences with a wide variety of musical styles ranging from vocal jazz, blues, gospel, standards from the Great American Songbook, and pop classics. Each member of Crossroads has earned the coveted gold medal with a different quartet in the past.

View information for all quartet champs since 1939 on the official Association of International Champions website!