Flightline first came together as members of the BoomTown youth chorus in 2013, and has since become one of the top quartets in Southern California. Through their time singing together, they’ve had the privilege to sing in both the Westminster Chorus and the Masters of Harmony, with one member (Marcus) even singing in Vocal Majority in Dallas. Since 2014 they have earned three medals in the Youth Barbershop Quartet Contest, finally winning gold in Las Vegas in 2017. In 2015, they took home the Dealers Choice Award and the 1st place trophy in the FWD making them District Champs. The quartet loves singing, performing, leading youth workshops, and sharing their music with the world. 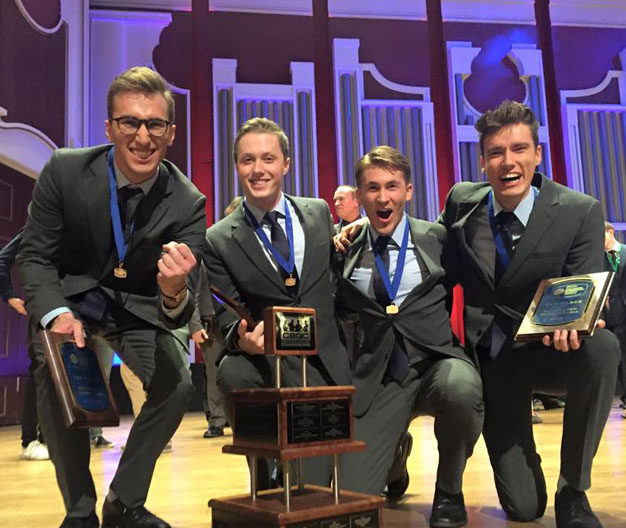 For the fourth time in eight years, a Swedish affiliate collegiate quartet from SNOBS (Society of Nordic Barbershoppers) brought the collegiate trophy home to Stockholm. On June 3, 2015 at the beautiful Heinz Hall in Pittsburgh, PA, Trocadero won the gold medal as the best collegiate quartet of 2015 and demonstrated once again the ever-growing reputation for vocal excellence our SNOBS affiliate is instilling and delivering to audiences around the world. 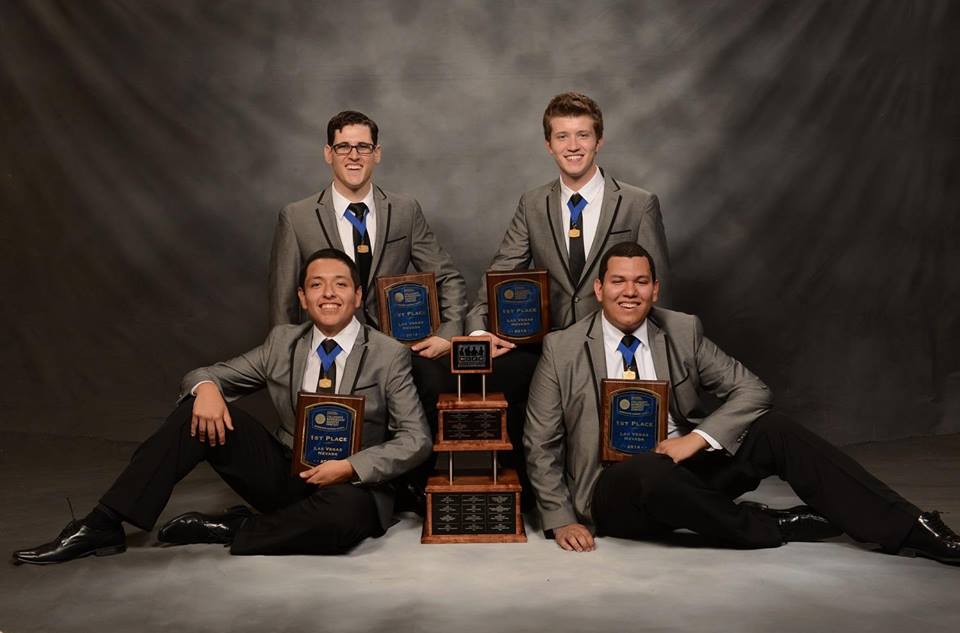 On July 1, 2014 at MGM Grand Garden Arena in Las Vegas, Nevada, The Academy won the gold medal as the best collegiate quartet of 2014. In this installment of our "Championship Performance" YouTube series, The Academy sings a David Wright arrangement of the 19th century ballad "Beautiful Dreamer." 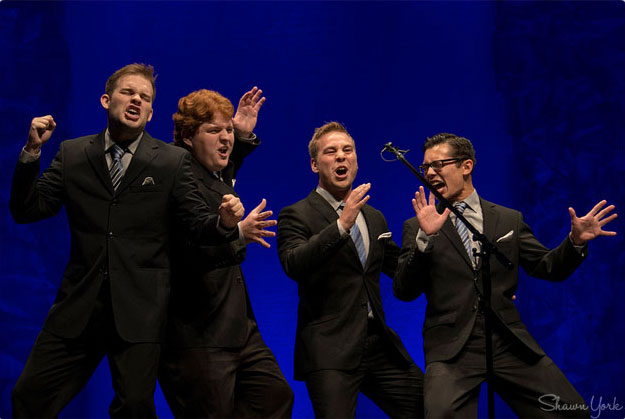 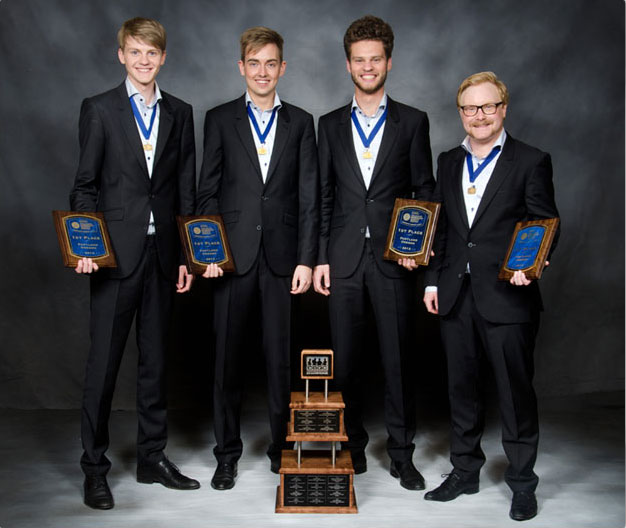 Travelling all the way from Stockholm, Sweden, Lemon Squeezy captured the gold medal, making them the third collegiate quartet from the Society of Nordic Barbershop Singers (SNOBS) Affiliate in the past 5 years to come away with the top prize.

The members of Lemon Squeezy are tenor Alexander Löfstedt, lead Victor Nilsson, baritone Jonathan von Döbeln, and bass Martin Jangö. They are also active members of the SNOBS chorus zero8 who placed 4th in the 2012 International Chorus Contest, making them the first Affiliate chorus to earn a medal. 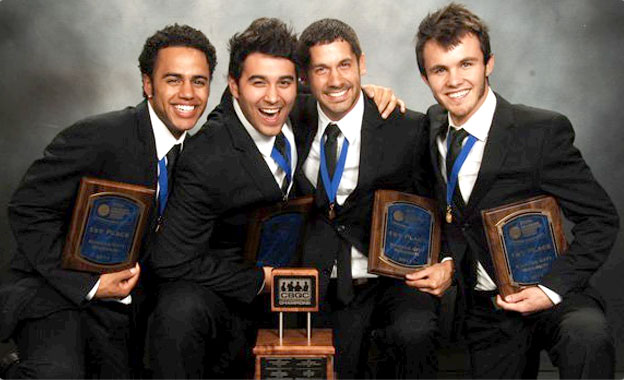 Prestige won the coveted gold medal in the 2011 International Barbershop Collegiate Quartet Competition at The Sprint Center in downtown Kansas City. The quartet dazzled the audience with their renditions of "Sewanee" and "Deed I Do".

Tenor Gordie Howe, lead Drew Ochoa, baritone Nick Gordon, and bass Dave Parrett have been competing in the collegiate contest together since 2009 where they won 4th place, and in 2010 where they won second place. 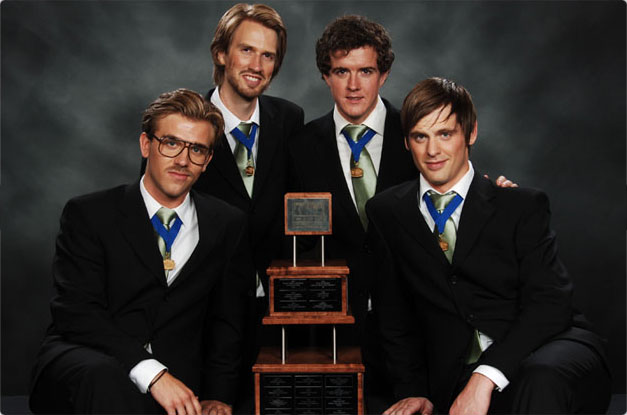 In a competition full of youthful excitement and talent, Swedish Match has won the coveted gold medal in the 2010 International Barbershop Collegiate Quartet Competition at The Pennsylvania Convention Center. Their renditions of "Love Walked In" and "Put Your Arms Around Me, Honey" won the hearts of the audience, and the highest scores from the judges.

Tenor Rasmus Krigström, lead Jakob Stenberg, baritone Mattias Larsson, and bass Mathias Roth are students the Stockholm Royal College of Music in Sweden and have been singing together since 2007. The group previously won the silver medal in the 2009 international competition in Anaheim. 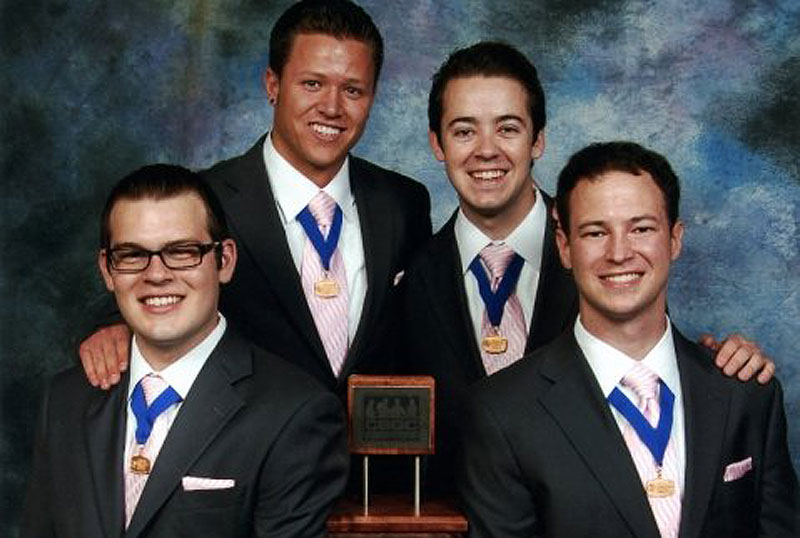 Hailing from Southern California, The Vagrants collegiate quartet comprised of four hip young men, charmed the judges and an enthusiastic audience to win the 2009 Bank of America Collegiate Quartet Contest.

The quartet, whose members include Colin Plain (baritone), Joey Buss (tenor), David Meye (bass), Jonny Tillery (lead), wowed the appreciative audience with their inspired renditions of Carolina Mammy and You're The Girl I Love. Although new to the Collegiate Quartet Competition, all four are seasoned competitors having won gold medals with both the Masters of Harmony chorus and the Westminster Chorus. Known for their chord crushing enthusiasm, which excites judges and audiences alike, this quartet is very excited about the path they have ahead of them.

View information for all past champs