Note: Performance stage times for each chorus are only an estimate. There are often unforeseen factors that might affect or delay the stage time for a group. If you're wanting to watch a specific performance, we encourage giving plenty of time before and after the listed stage time to ensure you don't miss that performance. 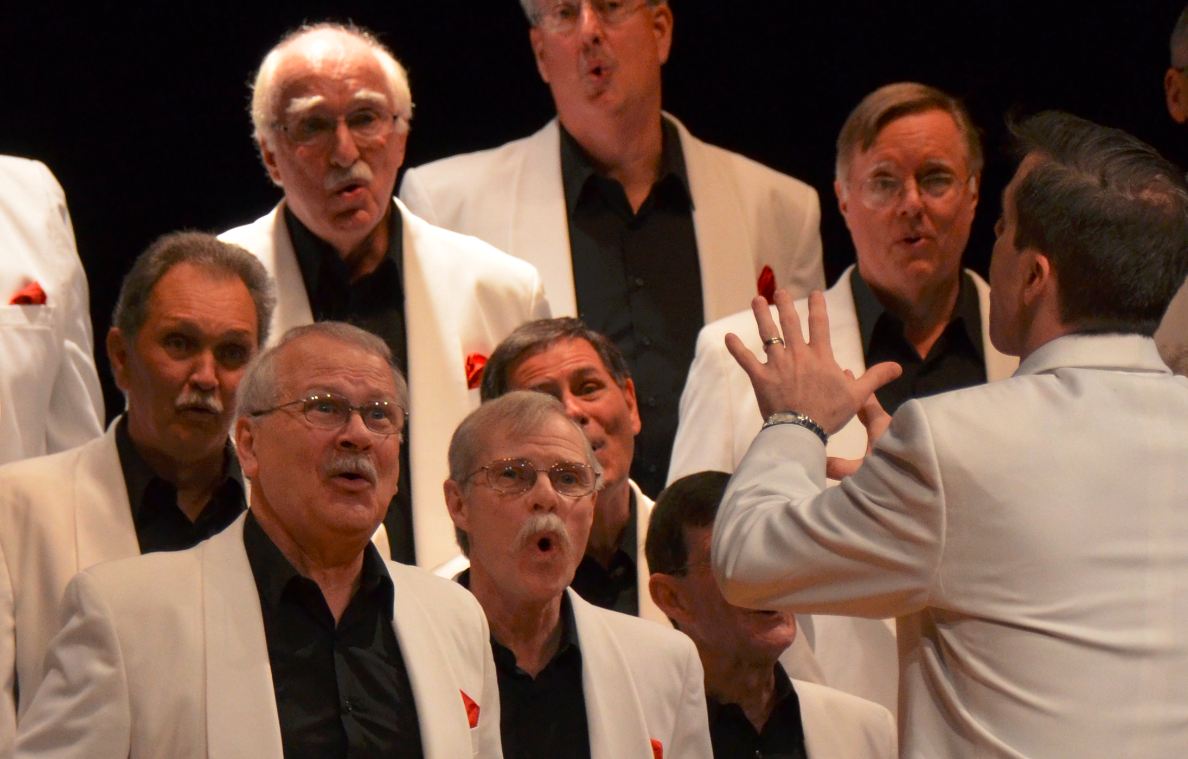 Website | Facebook
Based out of Columbus, Ohio, this Johnny Appleseed District chorus has around 60 active members and is enjoying their first appearance at International in many years. The Singing Buckeyes hosted the Buckeye Invitational for many years, and is now enjoying being the first out of the gate this summer in Pittsburgh!

Website | Facebook
This is Great Lakes Chorus first appearance at International since 2012 in Portland, and will be making their 13th appearance since 1953. Established in 1947, GLC is very active singing in their community, participating in competition, and performing contracted performances. 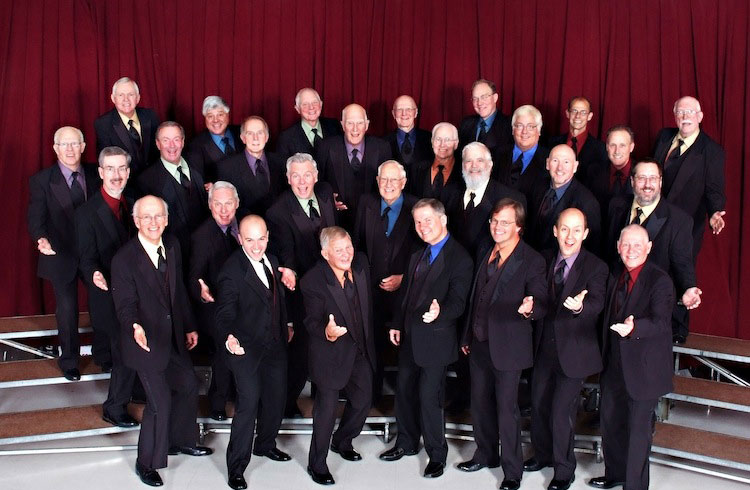 Website | Facebook
the Downeasters Chorus has about 40-50 men and hail from the greater Portland, Maine area. Based on their website, they spread the joy of barbershop harmony through a wide variety of performance and education opportunities, youth outreach, and charitable events in a way that promotes family values, friendship diversity, and a healthy community spirit. 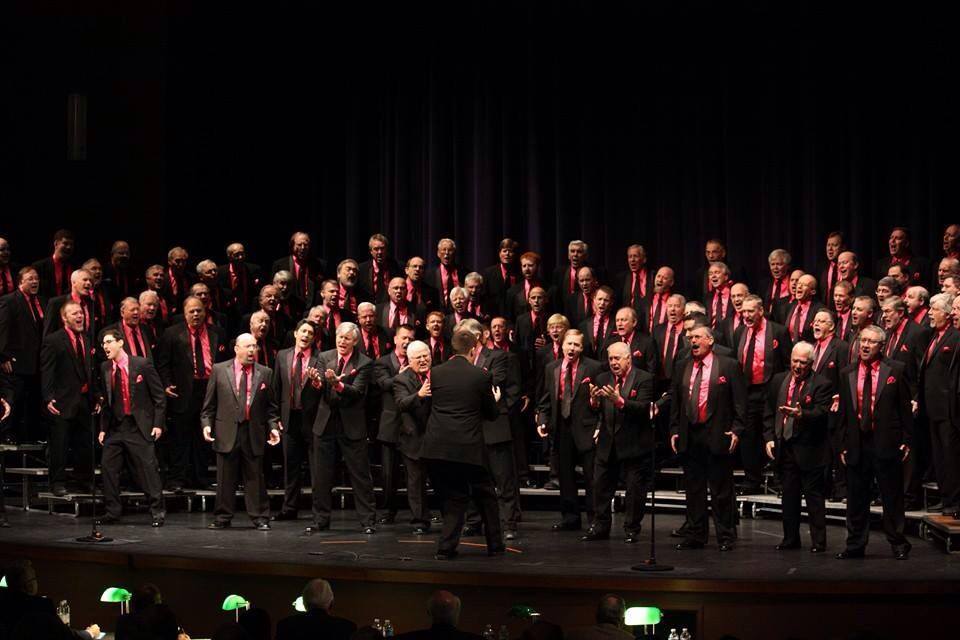 Facebook
This brand new chorus formed in the spring of 2014 and is proud to be representing the Carolinas District this year in Pittsburgh. This new groups has high amibitions to be the largest premier mens barbershop chorus in the south, and are already hard at work preparing and performing shows, participating in contests, working with coaches, representing in Pittsburgh, and building a solid foundation for the future of barbershop in their community. 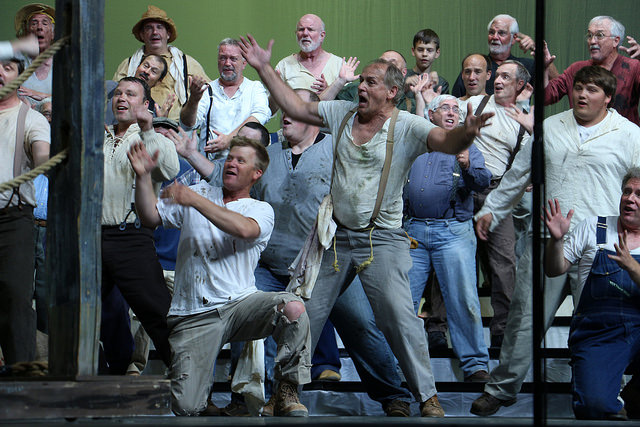 Website | Facebook
The Sound of Illinois will be returning to the International Stage now for the eight year in a row. This group of over 100 men has a rich history dating back to the early days of the Society when they formed the Bloomington, IL chapter in 1942. In addition, one of their quartets, After Hours, will be competing in the quartet contest and has quickly become one of the Society's favorite rising stars. 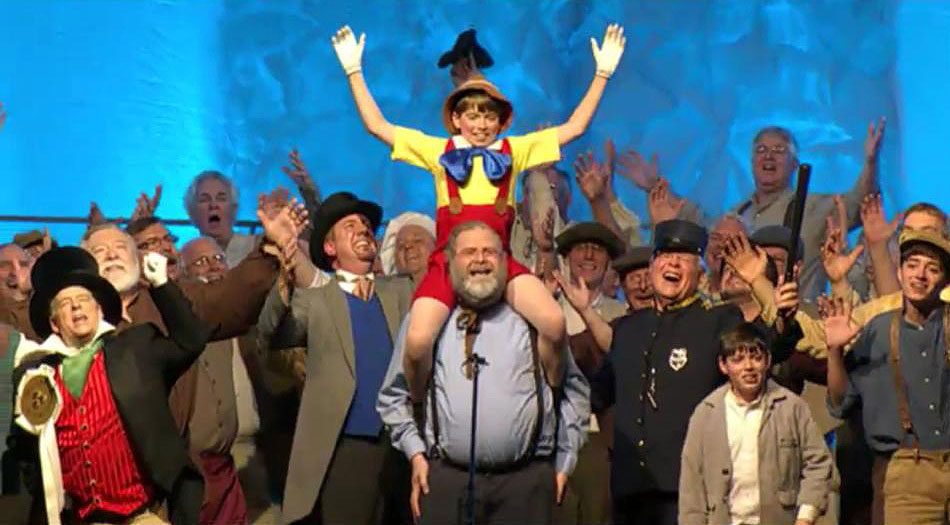 Website | Facebook
Since 1948, the Circle City Sound Barbershop Chorus and Quartets have entertained audiences in the Indianapolis metropolitan area and throughout the Midwest. This is the Circle City Sound's first appearance since 2013 in Toronto, and will be the International directing debut for their new directors Theo Hicks and David Zimmerman. 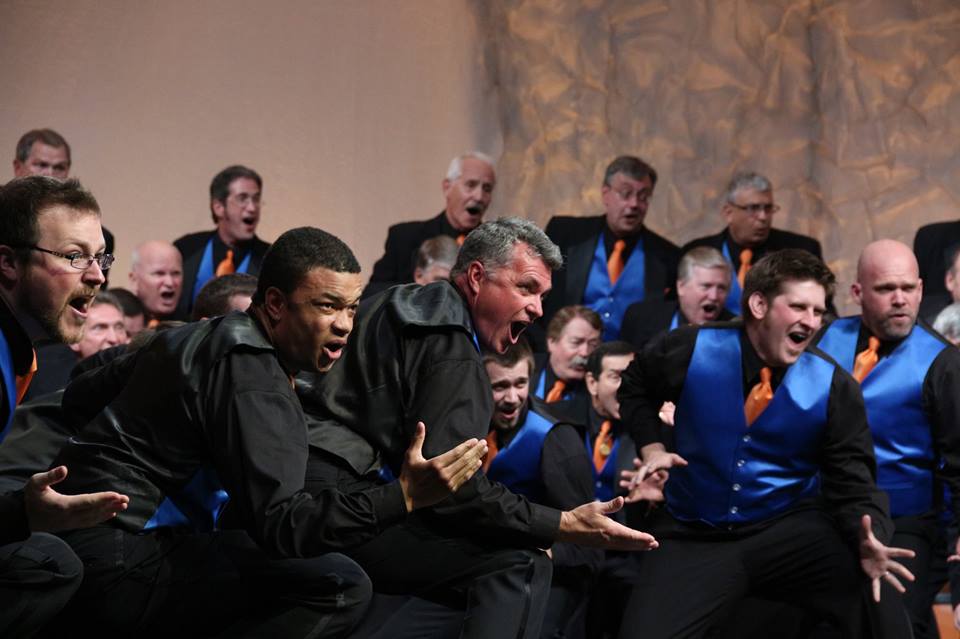 Website | Facebook
The Ambassadors of Harmony are back to defend their 2012 crown! The three-time gold medalist chorus is the St. Louis area's premier men's a cappella chorus of more than 160 voices known for powerful and musically masterful performances. Its repertoire includes Broadway classics, barbershop, jazz, pop and wide selection of holiday favorites, and they're widely known for the virtuosic arrangements and effortless delivery.

Website | Facebook
Under the direction of Justin Miller, The Westminster Chorus is the 2009 'Choir of the World' Pavarotti Trophy winner and the 2007 & 2010 International Chorus Gold Medalist of the Barbershop Harmony Society. They most recently competed in Toronto in 2013, finishing second, and are back in Pittsburgh eager to entertain the audience with what will no doubt be a fantastically memorable performance. 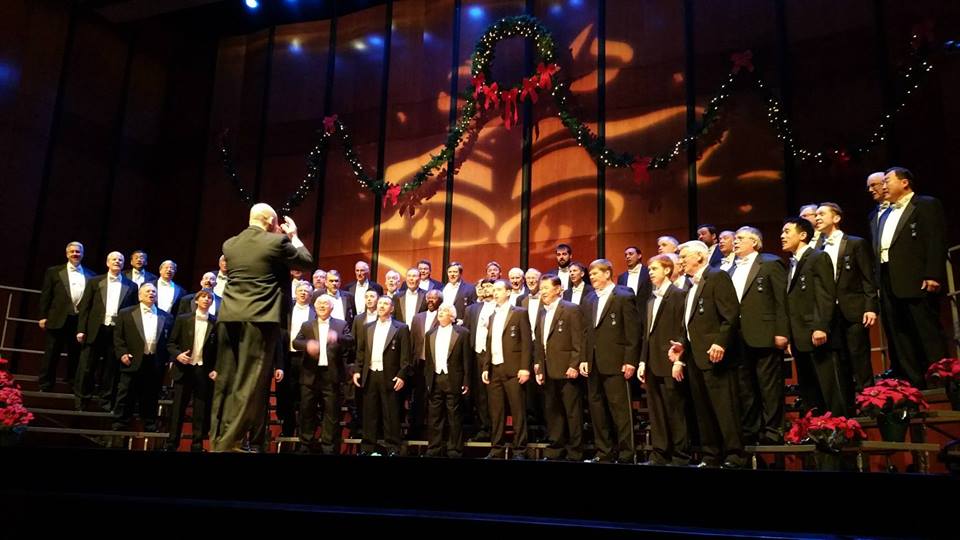 Website | Facebook
The Houston Tidelanders not only have one of the longest histories of the chapters competing in Pittsburgh (chartered in 1946), they also have track record of excellence, consistently finishing in the top twenty at the International Chorus Contest. 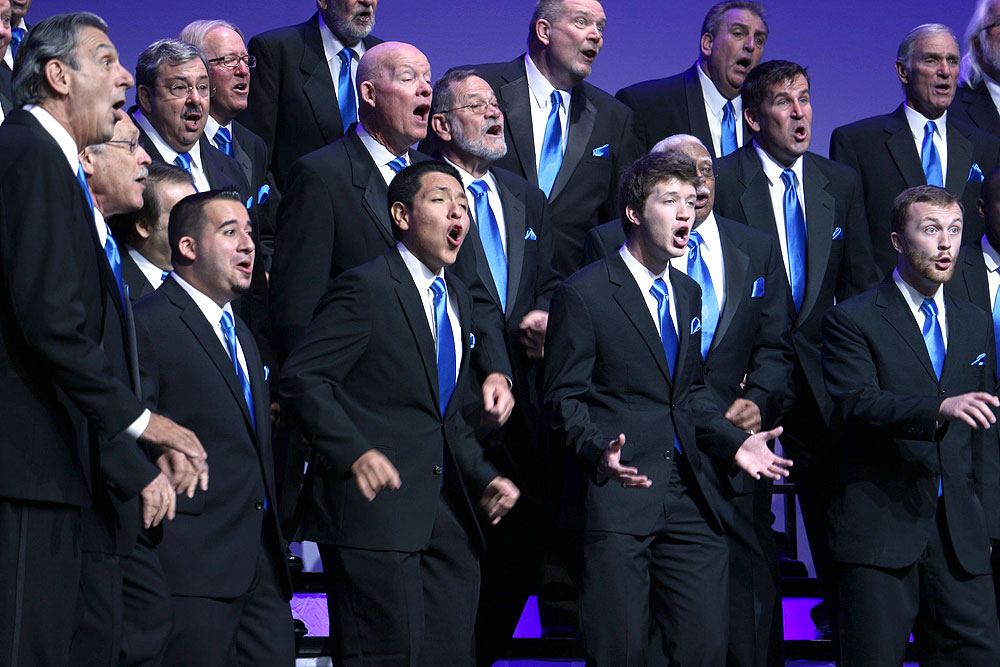 Website
This group from southeastern Florida returns to the International Chorus Contest for the fourth year in a row. Like many groups singing this year, this chorus is yet another new group quickly rising onto the competitive chorus scene. Their director, Alex Rubin, also competes with the top ten quartet, Throwback. 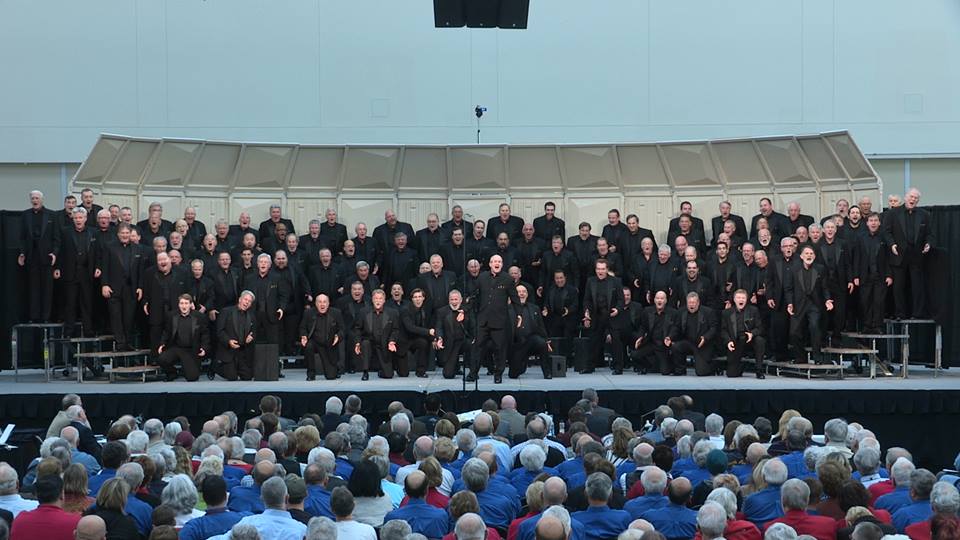 Website | Facebook
The 100-man Brothers In Harmony chorus under the direction of Jack Pinto (baritone of 2011 Quartet Champion Old school ) are back in Pittsburgh after taking a year off. The most recently placed 6th place in 2013 in Toronto and are looking to keep making the contest climb combining a committment to excellence and rich, vibrant barbershop. 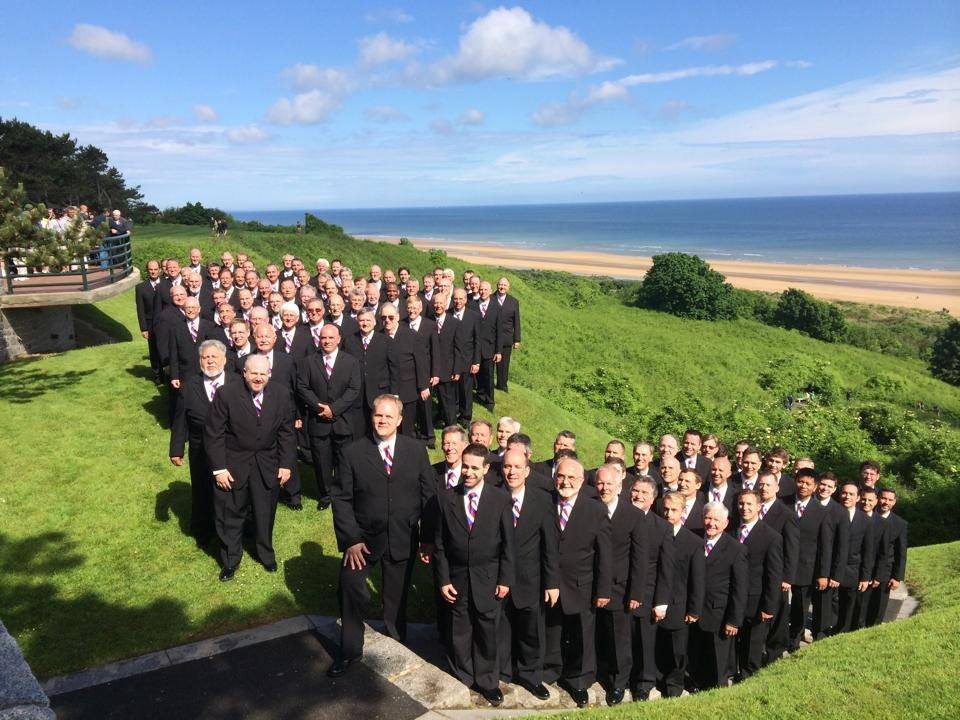 Website | Facebook
Founded in 1948, the Alexandria Harmonizers have established themsevles as one of the Society's greatest choruses on the east coast. With a focus on artistic excellence, community outreach, and musical education, the chorus strives to bring powerful performances every time they take the stage, and we're sure it will be no different in Pittsburgh. 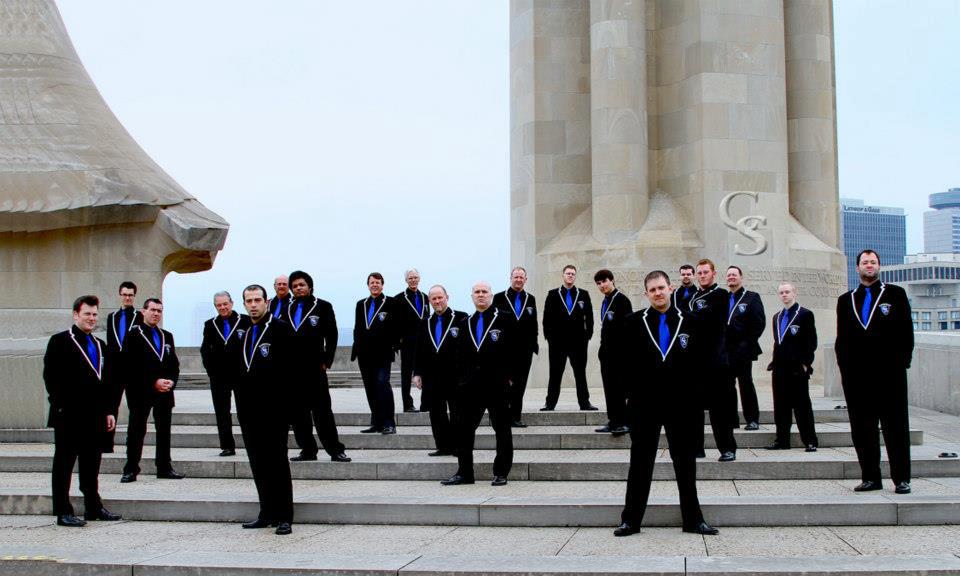 Website | Facebook
Central Standard is of the Society's many newer choruses competing this year in Pittsburgh. Central Standard hails from the Kansas City area and since forming in 2007, they have appeared four times on the International stage (2010, 2011, 2012, 2014). In 2014 they placed 9th in the chorus competition, and this year they are seeded at the same place heading into the contest. Since their creation less than ten years ago, Central Standard has been guided by their motto: "Excellence is Our Standard." 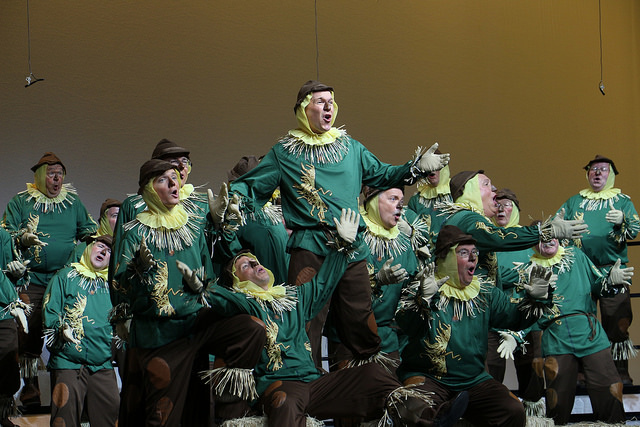 Website | Facebook
The Heralds of Harmony, under the direction of Tony DeRosa (a three-time gold medalist quartet singer) are back in Pittsburgh, bringing their unique brand of Central Florida barbershop to the contest stage. Formed in May of 1945, the Tampa Chapter of the Barbershop Harmony Society is celebrating the 70 years of harmony this year.

Website | Facebook
Northwest Sound is enjoying a fresh start with their brand new director Ken Potter this summer. Ken comes to Northwest Sound from Southern California where he served as the Assistant Director of the Masters of Harmony, 7-time International Champions, and arranger of the popular and entertaining Salem Senate-Aires. Northwest Sound is poised for even more greatness and is excited to be in Pittsburgh! 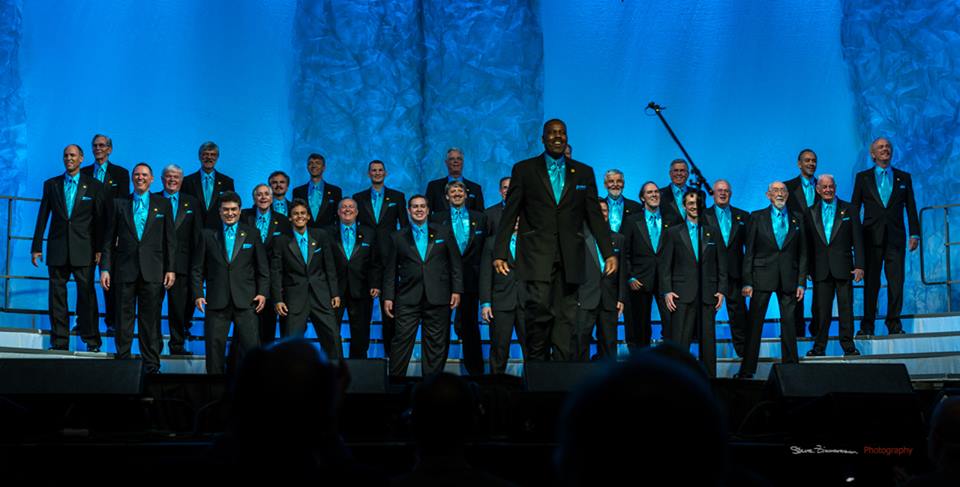 Website | Facebook
Duke City Sound's motto is "Attitude is Everything." And these guys will no doubt go out of their way to prove it this summer! Farris Collins has been its musical director since the chorus' beginning in 1998, and has the talents to bring out the very best in the chorus.

Hamilton, ON
Directed by Jordan Travis

Website | Facebook
Formed in 2003, this will be Harbourtown Sound's second trip to an International Chorus Competition. Harbourtown Sound is directed by collegiate quartet champion and International quartet competitor Jordan Travis and hails from the competitive Ontario District (which regularly fields at least two choruses each year). 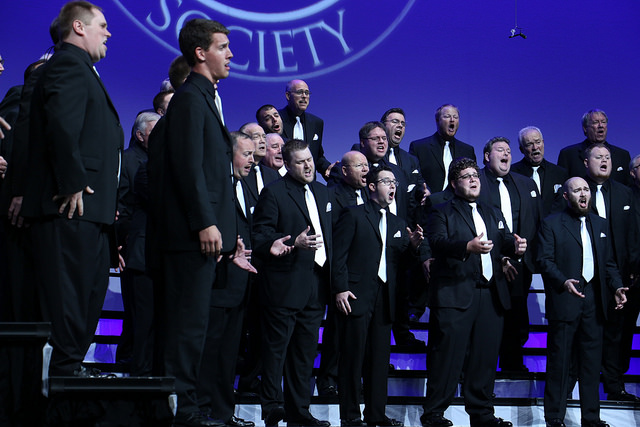 Website
Music City Chorus is coming off one of their most exciting contests last year in Las Vegas where they finished 7th place, and are looking to continue making the best barbershop they can with a Nashville flare! Hailing from Nashville aka "Music City, USA", they bring a long and rich history of barbershop and musical excellence to the stage, and can't wait to perform in Pittsburgh.

Website | Facebook
Founded in 2008, The Marcsmen from San Antonio bring a youthful energy and excitment to the stage. They are made up of members from all over the central Texas corridor, from the San Antonio and Austin areas, some even from out of the state, and have performed and competed in past International contests as well as Youth Chorus Festivals. 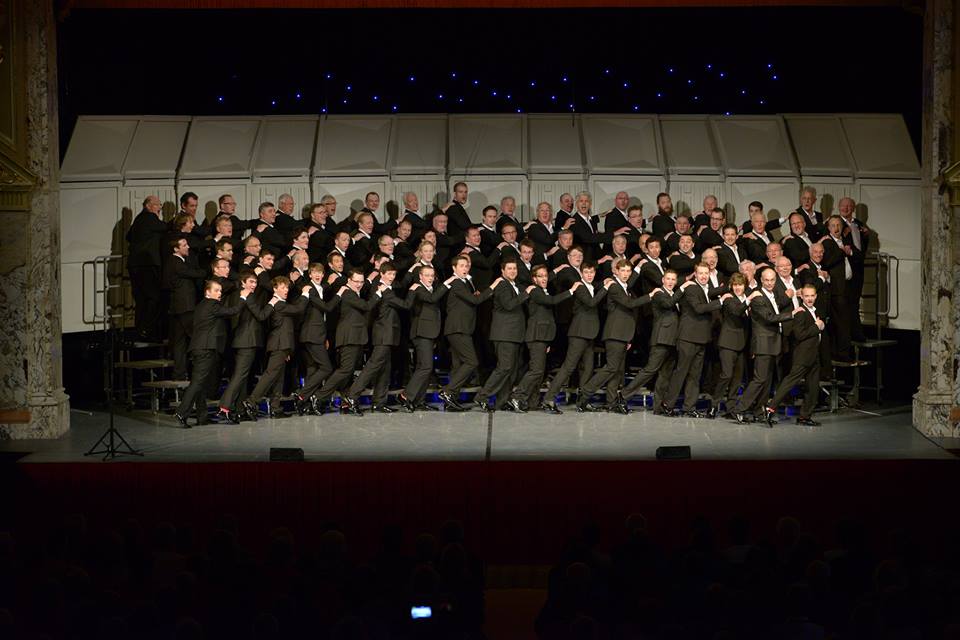 Website | Facebook
Formed in 1978, Hallmark of Harmony have been named the best chorus in Britain seven times. They have had the honor of representing the British Association of Barbershop Singers (BABS) three times at the international barbershop contest in America. 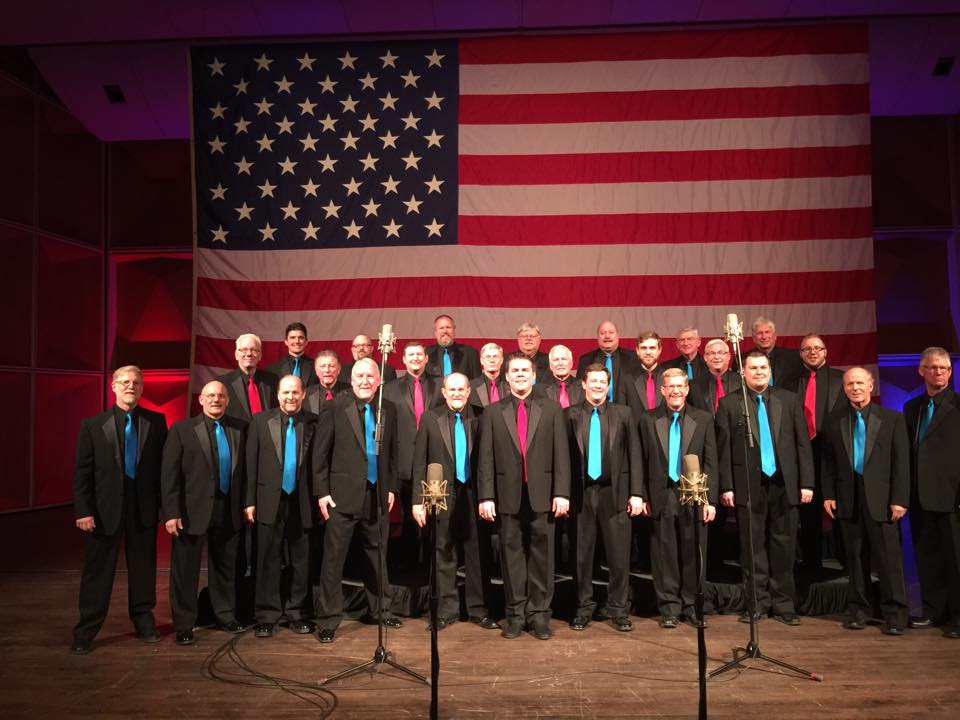 Website | Facebook
Founded in 1989, Midwest Vocal Express (MVE) male a cappella chorus specializes in "Storytelling through Song". Headquartered in Greendale, WI, they are made up of singers from across Southeast Wisconsin, MVE are are known locally for the best in family entertainment, and worldwide for their "legendary" theatrical presentations on the Barbershop Harmony Society's International Contest Stage. 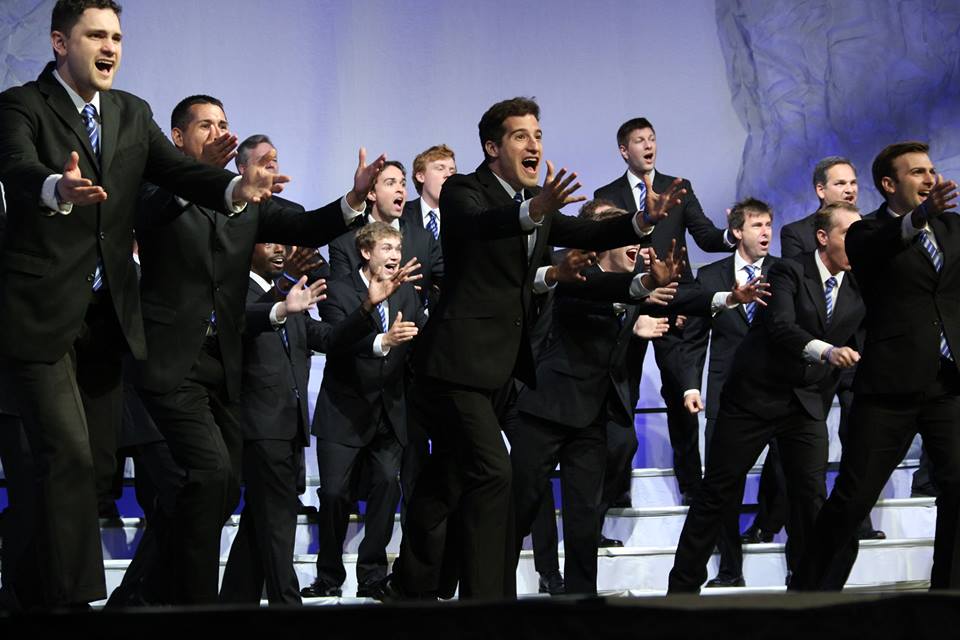 Website | Facebook
Since it's founding in 2008, Voices of Gotham has quickly distinguished itself among the many other choruses competing in Pittsburgh. Two years ago they erupted onto the scene, breaking in the top ten for the first time. This year marks the debut of their new director, Bill Stauffer, who is looking forward to leading VoG and bringing a unique brand of barbershop that can only come from the heart of New York City. 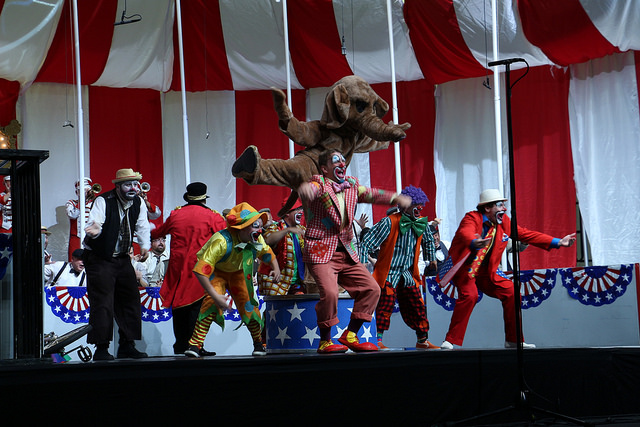 Website | Facebook
The Alliance is a Johnny Appleseed District champion and a regular top ten competitor at the International Chorus Contest. In the last 11 years, The Alliance has placed in the top ten every time they've competed. In addition to their success as a chorus, this chapter also has a rich history of successful quartets who have competed at the highest level at the International Quartet Contest. 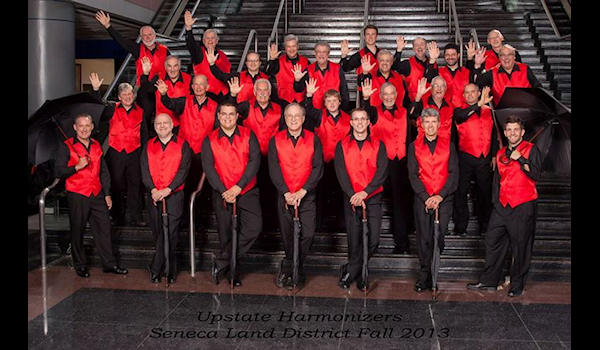 Website | Facebook
Representing the Seneca Lands District, the Upstate Harmonizers competed in the International Chorus Contest in 2012, 2013, and 2014. The Upstate Harmonizers was founded in 2009, and has been representing the Chapter every year in the Fall Contest of the Society's Seneca Land District, and is excited to be in Pittsburgh this summer. 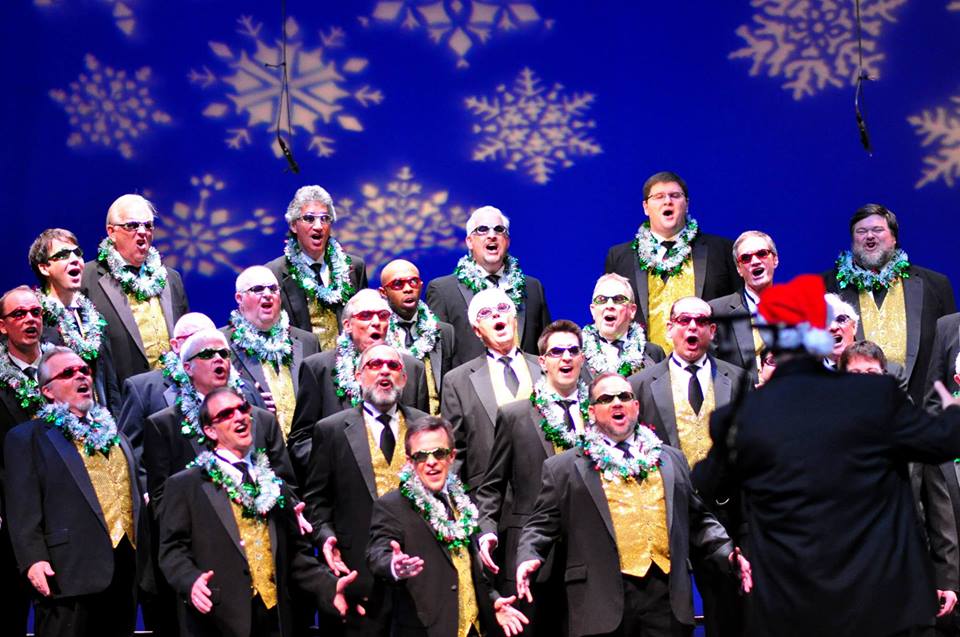 Website | Facebook
This group from the Bay Area in California is one of four reasons why the Far Western District is one of the most competitive in the Society. This chorus is 11 years old and has rapidly come onto the scene as a one of the strongest competing choruses out there. Since forming in 2006, they have won multiple Far Western District championships and have also placed in the top ten six times.

Website | Facebook
2001 International Chorus Champion, The New Tradition Chorus, has a remarkable history of excellence on the International stage. In addition to their 2001 championship, this group of men also placed in the top five 18 times since 1988. They are led by International Quartet Champion Jay Giallombardo, who won the quartet competition in 1979 with the quartet Grandma's Boys. 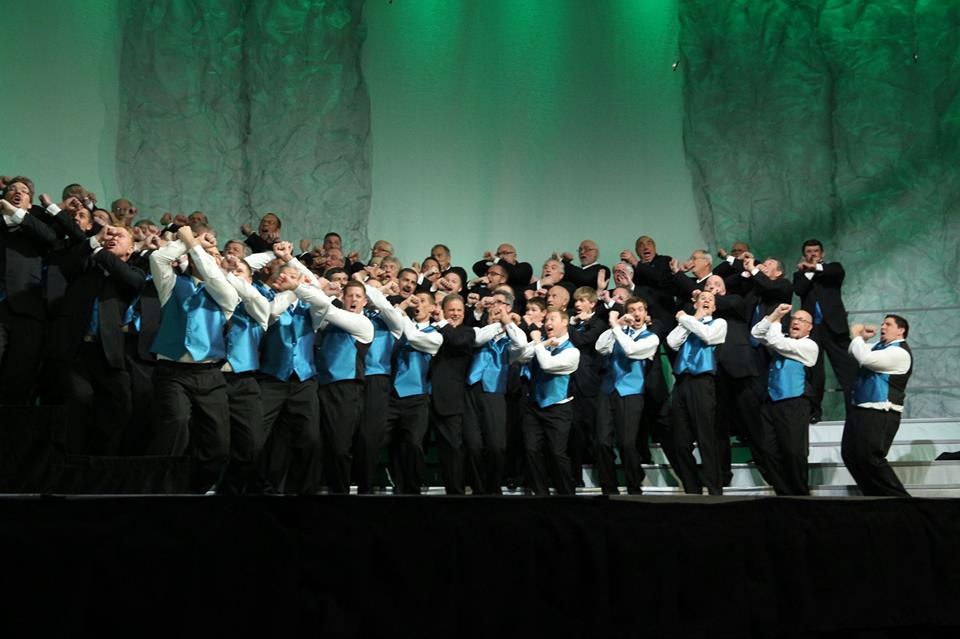 Website | Facebook
This chorus from Nebraska and the Central States District has been climbing the ranks of competitive choruses. In 2010, at the competition in Philadelphia, the Pathfinder Chorus placed 20th. In Toronto they placed 10th place, and in Las Vegas in an incredibly strong field of choruses they finished 11th with a big bump in scores over their previous year. Will this trend continue in Pittsburgh?

Website | Facebook
The Men of Independence are a barbershop chorus whose roots are firmly planted in the tradition of quartet singing. This current Johnny Appleseed District chorus champion includes perrenial International semifinalist comedy quartet Hot Air Buffoons and is led by two-time quartet champion Gary Lewis. Over the past few years at International they've seen their scores rise from 81.8% in Toronto to 83% in Las Vegas, and are excited to see this trend continue in Pittsburgh.